Exploring the Hot and Energetic Universe: The second scientific conference dedicated to the Athena X-ray observatory

The Real Teatro Santa Cecilia was founded in 1692 by the Viceroy Giovan Francesco Pacecho, duke of Uzeda  and the Unione dei Musici.

It was the most importan theatre of Palermo until the construction of the new ones Teatro Politeama, Teatro Massimo and Teatro Biondo in the XIX century.

In 1726 it was closed because of the damages caused by an earthquake and it was reopened only in 1787.

In 1853 the theatre was completely renovated by Carlo Giachery and Giovanni Di Bartolo that redesigned the external facade.

The place had no success and in 1888 it closed definitively.

In the early XX century it was bought by a company that transformed it into a warehouse.

Thanks to European funds, the building was restored and provided with the necessary facilities for a public use.

On 9th September 2010 the theatre were granted to a permanent orchestral complex called Orchestra Jazz Siciliana that represents in Italy the first and only permanent jazz orchestra with public participation.

See the How to get there page for the location 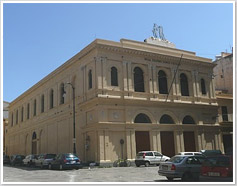