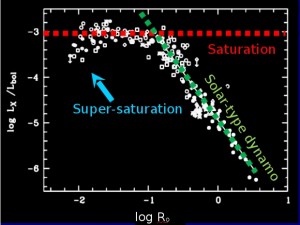 Magnetic activity is a prime characteristic of late-type stars, i.e. stars with masses and ages similar to the Sun (solar-like stars), and those at the cool end of the main-sequence (M stars). Substellar objects (brown dwarfs) also exhibit magnetic activity signatures albeit weaker than in solar-type or M stars and with a strong age and mass dependence. The strongest activity is seen in young stars on the pre-main sequence. However, in the earliest evolutionary phases the radiation in most diagnostics of magnetic activity is dominated by other processes such as mass accretion and outflows.

Magnetic activity manifests itself in excess emissions over the stellar photospheric radiation with contributions throughout the whole electromagnetic spectrum from the radio, over the optical to the UV and X-ray regime. These emissions are associated with plasma, heated through magnetic processes to temperatures of 10 000 K (chromosphere) to more than 1 000 000 K (corona). The stellar magnetic field itself is believed to be generated and maintained on evolutionary timescales by a dynamo which is driven by the coupling of differential rotation and surface convection.

OAPa has a several decade long record of stellar activity studies, in particular for the X-ray band. Today researchers at OAPa study the dependence of stellar chromospheres and coronae on parameters that are critical for characterizing the dynamo, such as the stellar rotation period, the convective turnover time, the evolutionary stage and spectral type (mass). Observational studies are carried out with space-borne satellites for UV and X-ray astrophysics (e.g. GALEX, Chandra, XMM-Newton, Suzaku), ground-based optical facilities (e.g. VLT), and radio telescopes (e.g. JVLA). Next to dedicated observing programs, magnetic activity studies can benefit from projects in other branches of stellar research which provide serendipitously access to common activity diagnostics.