• Star formation and disks evolution in the Eagle Nebula

The Eagle Nebula (M16) and its central cluster NGC 6611 is one of the most spectacular and known star forming region in the sky, mainly thanks to the wonderful images of the Pillar of the Creation by the Hubble Space Telescope. NGC 6611 is a young cluster (1-3 Myrs), relatively close to our Sun (1.7k pc) and with a rich stellar population of both low mass and high mass stars.

NGC 6611 is a template of intermediate massive cluster, an ideal target to study how massive stars affect the star formation process in the parental molecular cloud. In fact, their intense emission of ionizing UV and X-ray radiation ionizes and dissociate the gas in the surrounding nebula creating a photodissociation front, which expands mainly because of the larger pressure with respect the surrounding medium. This is the main mechanism for the creation of the HII bubbles observed in several star forming clouds. The dispersion of the molecular cloud indeed halt the star formation process. However, the expansion of the photodissociation front induces new events of gravitational collapse in the cloud, triggering the formation of new stars.

Massive stars can also affect the evolution of nearby protoplanetary disks and the formation of planets in them. O stars, in fact, create an intense UV radiation field in the parental cluster, thousands of times more intense than the solar local UV field. When disks are irradiated by such intense UV radiation, gas molecules are dissociated and atoms ionized, rising disks temperatures up to thousand degrees (for comparison, typical disks temperatures are just a few tens of degrees). Such a high temperatures produces an intense thermal pressure that drives a flow of gas away from the disk….this is the “disks photoevaporation process”. Photoevaporating disks have been directly observed by the Hubble Space Telescope in the Orion Cluster.

In a series of paper (Guarcello et al. 2007, Guarcello et al. 2009) I have analyzed archival optical, infrared, and X-ray observation to identify 458 stars with disks and 790 without disks associated to NGC 6611 and M16, and discover that the disk fraction (i.e. the fraction of cluster members with a disk) decreases close to massive stars, where the ionizing local field is more intense. After discarding other interpretations, this confirm that the O stars in NGC 6611 core dissipate fast nearby protoplanetary disks.

Motivated by this result, the outer regions of the Eagle Nebula were explored in X-rays with two 78 ksec Chandra/ACIS-I observations I have obtained. The analysis of these observations, published in Guarcello et al. 2010, and new available infrared data from UKIDSS survey, allowed me to identify and validate candidate members in the outskirt of the cluster. The final list of validated members counts 1103 stars without a disk and 834 stars with disks. This study confirmed the influence of the O stars on disks dissipation timescale as previously found, and allowed me to discover an sequence of star formation from south-east to north-west, likely induced by the incidence of a gian molecular shell on the Eagle Nebula about 6 million years ago.

Several interesting stars are part of the Eagle Nebula. Among these, the blue stars with excesses (BWE stars) deserved a particular attention. In Guarcello et al. 2010 these stars have been identified as stars with disks with very blue optical colors, more typical of the foreground stellar population rather than the cluster members, and interpreted as stars with disks whose optical emission is scattered along the line of sight by an highly inclined disk. Their membership to NGC 6611 has been later confirmed by the spectroscopic analysis made by Bonito et al. 2013. An intriguing hypothesis on the nature of these stars has been made by de Marchi et al. 2013, who hypothesized that these stars belong to a previous population of stars formed in the Eagle Nebula about 8 Myrs ago, and that still retained a massive disk. 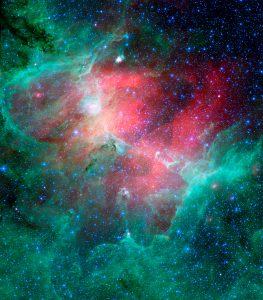 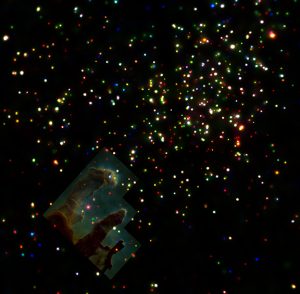 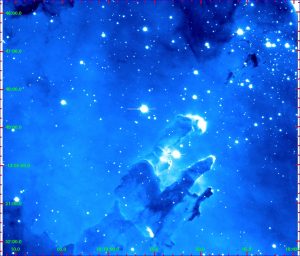 VIMOS image of the pillars of creation and NGC 6611 core 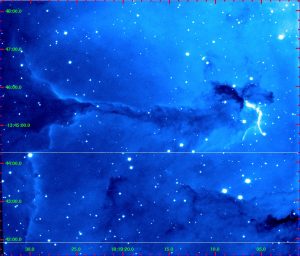 VIMOS image of the pillar 5