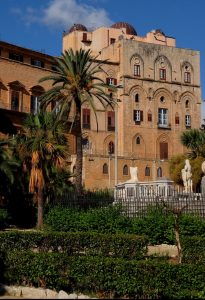 Palermo Astronomical Observatory “Giuseppe S. Vaiana” is one of the research centres of the National Institute for Astrophysics (INAF). It works together with Palermo University through the Department of Physics and Chemistry. An agreement between the two institutions allows the observatory to maintain its premises in Palazzo dei Normanni, where it has been sited since its foundation.
Palermo astronomical observatory was established in 1792, at the behest of the viceroy Caramanico, by the abbè Giuseppe Piazzi, its first director, who here discovered Ceres, the first asteroid. After two centuries of vicissitudes, today OAPa’s main characteristic is its specific vocation in the field of space astrophysics. Throughout the past few decades new research lines have developed out of the original research in the physics of solar and stellar coronae started by Giuseppe Vaiana in the 80’s of the past century.
These activities are linked in a network where each specific research field benefits from the experience and knowledge gained in other areas. For instance, studies on supernovae remnants make use of numerical models based on know-how derived from high performance calculation, which in turn was developed in order to study solar and stellar coronae models; studies in astrobiology employ research on the features of high-energy stellar radiation – an area in which the OAPa researchers are undisputed leaders at the international level – as well as skills acquired in building experimental apparatus and instruments for X-ray astronomy; studies on extrasolar planets exploit knowledge gained in the field of stellar physics.
The network of activities also involves several frontier research fields both at the national and international level. In particular, OAPa has a role in the study and development of new generation satellites for X-ray astronomy, in international research programs in the physics of stellar and supernovae remnants, in the implementation of a European – originally just Italian (GRID) – network infrastructure for numerical calculation.
Beside these scientific and technological activities, other programs include: research in history of astronomy, born from the need to rearrange and protect the large historical and instrumental heritage: promotion of scientific culture for school students and the general public; organization and valorization of the historical archives, which has allowed for the retrieval of meteorological data collected since 1790.
In addition, a wide variety of activities concerning high training courses for university and postgraduate students is carried out at the Observatory.
The current OAPa staff, which includes approximately 20 researchers and associate professors, 15 postdoctoral researchers, scholarship holders and PhD students, plus 20 support personnel, has been so far able to attract a considerable amount of external funds for research, high training, teaching and outreach activities.
Work takes place in two buildings: the historical venue at the top of Palazzo dei Normanni, where the Observatory was founded, and the Laboratory, sited in via Ingrassia, which hosts labs, workshops and equipment for high-performance calculation.