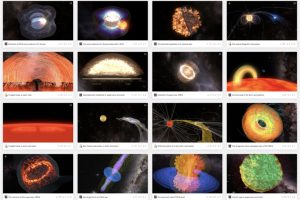 The development of numerical models is a powerful method to explore properties and evolution of astrophysical objects, mainly for remote objects or when the necessary spatial details are higher than the resolution of modern telescopes. These models can be both hydrodynamical or magneto-hydrodynamical, depending on the importance of the effects related to the magnetic fields. In the last years, the development of Virtual Reality is offering new possibilities to explore 3D astrophysical models and use them for science or education.

For this reason, a team of the Astronomical Observatory of Palermo (S. Orlando, I. Pillitteri, F. Bocchino, L. Daricello, L. Leonardi) has developed to project 3DMAP-VR (three-dimensional Modeling of Astrophysical Phenomena in Virtual Reality), aimed at the realization of 3D magnetohydrodynamic models of astrophysical objects for Virtual Reality. These models account for all known physical processes occurring in these objects, using parallel numerical codes for astrophysical plasmas such as FLASH and PLUTO on high performance computing facilities such as CINECA. The produced models are available in the gallery “Universe in hands” on Sketchfab, a platform for publishing and sharing 3D models for virtual reality and augmented reality.