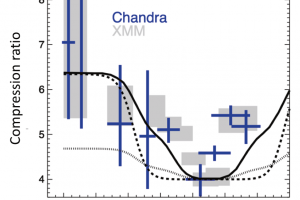 Our planet is constantly bombarded by energetic particles (mainly protons) called “cosmic rays“. The study of cosmic rays is a leading science topic given its importance in several fields, such as the study of the effects on instrumentation and astronauts in space, where the natural protection against these particles provided by the magnetic field of Earth is low or null. The most energetic cosmic rays can have energies up some 1020 eV, about 40 million times the energy of the most energetic particles produced by the Large Hadronic Collider, the largest particle accelerator built by men.

What can accelerate cosmic rays up to these high energies? One of the main cosmic rays factory (for energies below a few PeV, e.g.: 1015 eV) are believed to be the supernova remnants, e.g. rapidly expanding nebulae produced by the explosion of massive stars. These clouds can transfer up to 10%-20% of their energetic energy to these particles. When observed in radio and X-rays, some remnants show emission from energetic particles moving in magnetic fields (synchrothron emission). In some cases, gamma rays have also been detected, produced by the interaction between relativistic particles and the medium (gas and dust) where the remnant is expanding. However, these findings do not provide a final clue about the role of supernova remnants in accelerating cosmic rays. A smocking gun may be provided by the measurement of the density of the material compressed by the expanding shock produced by the supernova. The material compressed by supernova remnants, in fact, meet the conditions of “strong shocks“: the density of the compressed material (post-shock) must be 4 times that of the uncompressed one (pre-shock). Models describing the mechanism responsible for the acceleration of cosmic rays predict instead that this compression ratio must be as high as 7, and that it must depend on the angle between the direction of the expansion of the shock and the magnetic field (0 if perpendicula, maximum if parallel).

The supernova remnant SN 1006 is one of the most interesting objects for studies of the role of supernova remnants in the acceleration of cosmic rays. SN 1006 is in fact expanding in a low-density uniform medium, as demonstrated by its almost circular shape. This facilitate the measurement of the density of pre-shock and post-shock material. Several studies have also found emission by relatistic particles. For these reasons, SN 1006 has been the subject of the study led by the astronomer R. Giuffrida (University of Palermo, INAF – Astronomical Observatory of Palermo), based on X-ray observations with the NASA and ESA satellites Chandra and XMM-Newton. Analyzing regions of SN 1006 with no ejecta (e.g.: blobs of material launched by the supernova explosion) and where emission from relativistic particles have been detected, the team has verified that pre-shock and post-shock material have high compression ratio (the ratio between the post-shock density over that of the pre-shock material), which also depends on the inclination of the magnetic field with respect to the direction of expansion of the shock. This provides a strong evidence supporting the role of SN 1006 in accelerating cosmic rays. The study is described in the paper: “The supernova remnant SN 1006 as a Galactic particle accelerator“, recently appeared on Nature Communication. The coauthor list counts M. Miceli (corresponding author) and G. Peres of the University of Palermo and F. Bocchino, E. Greco, and S. Orlando of INAF – Astronomical Observatory of Palermo, together with researchers of the University of Chicago, Amsterdarm, and Paris-Saclay.

At this link it is possible to download a model for 3D printers of SN1006, based on a model of SN1006 developed by the astronomers of INAF-OAPA. One of these 3D models can be visualized here.