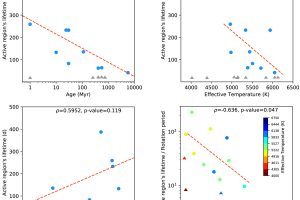 Almost all stars in the Universe produce their own magnetic field with a process called stellar dynamo, whose basic ingredients are stellar rotation and convection. In general, magnetic fields are produced and are affected by charged particles, which is what stellar plasma is made of. In stars the magnetic field and plasma thus interact, producing a class of transient phenomena that we can observe in the Solar photosphere, chromosphere and corona, which are classified as “stellar activity“. In this class we can find phenomena such as spots, flares, and prominences.

Stellar activity is more intense in those regions of the stellar surface and atmosphere where the magnetic field intensity is larger. These transient regions are called “active regions“, and they are dominated by spots, prominences and other magnetic phenomena. In the last decades, several studies have analyzed how stellar magnetic activity varies as a function of stellar parameters, such as mass, and stellar age. These studies are of particular importance for two reasons. First, magnetic activity allows astronomers to probe the stellar internal structure and its evolution. Second, these phenomena and their energetic (UV and X-rays) radiation can strongly impact the surrounding environment and planetary systems.

All these studies conclude that all the diagnostics probing stellar magnetic activity decline with age. In general, this is a consequence of the evolution of the stellar magnetic field, which results from the evolution of stellar dynamo mainly due to stellar spin-down and changes in their internal structure. Does this decline occur also for the mean lifetime of active regions? To answer this question, the team of researchers led by the astronomer J. Maldonado (INAF – Astronomical Observatory of Palermo) have studied a sample of 130 stars in star clusters or associations, which allow astronomers to constrain with precision their ages. The age of these stars ranges from a few very young stars associated with the Taurus Association (1-2 million of years old) to a dozen of stars in the cluster NGC 752 (more than 1 billion years old). All these stars were observed with the spectrograph HARPS-N mounted at the Telescopio Nazionale Galileo, in the framework of the GAPS (Global Architecture of Planetary Systems) program. From these observations, it is possible to measure a few indices of stellar activity, which allowed the team to confirm the decline with age of stellar activity, and to verify that such a decline is slower for low-mass stars. For a subsample of stars, the researchers could also measure the mean lifetime of active regions from the light curves (e.g.: measurements of stellar luminosity as a function of time) obtained with the NASA satellite TESS (Transiting Exoplanet Survey Satellite). Despite the small number of stars, from this analysis it is evident the decline with stellar age of the mean lifetime of active regions, which goes from a few hundreds days in the youngest stars in the sample (1-2 million of years) to a few days in the oldest ones (about 1 billion of years old). The study is described in the paper:”The GAPS programme at TNG. XXXIV. Activity-rotation, flux-flux relationships, and active-region evolution through stellar age“, recently appeared on the journal Astronomy & Astrophysics. The team counts 21 astronomers of several institutions, among whom S. Colombo, A. Petralia, S. Benatti, G. Micela, A. Maggio and L. Affer of INAF – Astronomical Observatory of Palermo.

The figure (click here to visualize the entire image) shows how the mean lifetime of active regions varies as a function of: stellar age (upper left panel), temperature (upper right panel), one of the most widely used indices of chromospheric activity, the RHK index (bottom left panel), and the Rossby number, which is a quantity which depends on star rotation period and convection (bottom right panel).