A super-Earth for the star GJ 9689. The study: “HADES RV programme with HARPS-N at TNG. XIV. A candidate super-Earth orbiting the M-dwarf GJ 9689 with a period close to half the stellar rotation period” of J. Maldonado (INAF-OAPA) recently appeared on A&A 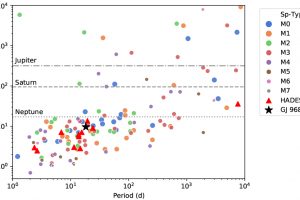 M stars are the most common stars in the Universe. They have a mass ranging between 0.6 and 0.08 Solar masses in the main sequence, and an effective temperature ranging between 3900 K and 2400 K. In these stars, the signals due to the presence of planets, such as radial velocity (periodic oscillations of the star from its rest position during the orbit of the planets due to the mutual gravitational attraction), are more evident compared with more massive stars. For this reason, M stars are the ideal target to search for exoplanets.

To date, about 130 exoplanets have been discovered around M stars with the radial velocity technique. Thanks to several existing projects devoted in searching planets around M stars, we know that in these stars terrestrial planets are very common. For instance, the “Harps-N Dwarf Survey” revealed an incidence of about 36% of terrestrial planets with orbital period shorter than 10 days around M stars, and 52% with periods longer than 10 days. Analogously, the observations made with the NASA satellite Kepler revealed an incidence of 52% of terrestrial planets with orbital period shorter than 50 days in a sample of stars including M stars and slightly more massive stars (K stars). In 2014, a study was published (link) where the authors estimated with statistic arguments that on average there is one planet for each M star in our Galaxy.

In the framework of the project HADES (HARPS-N red Dwarf Exoplanet Survey), based on spectroscopic observations made with the spectrograph HARPS-N mounted on the Telescopio Nazionale Galileo, the team led by the astronomer J. Maldonado (INAF – Astronomical Observatory of Palermo) analyzed 174 spectroscopic observations of the M0.5V star GJ 9689, about 101 light years away from the Sun. The team has identified two radial velocity signals with a period of 18.3 and 39.3 days. Thanks to a detailed analysis of the spectroscopic signals due to the stellar activity (in this class are included all the phenomena due to the interaction between the stellar magnetic field and plasma) and light curves (which is the time variation of the luminosity of the star), the team demonstrated that the 39.3 days signal is due to the stellar rotation. Despite being about half of the longest signal, the 18.3 days signal is not due to stellar activity. It instead indicates the presence of a super-Earth with a minimum mass of 9.7 Earth masses orbiting with a major semi axis of 0.1 AU (astronomical unit, 1 AU is the mean Earth-Sun distance, equal to 150 million km). The study is described in the article: “HADES RV programme with HARPS-N at TNG. XIV. A candidate super-Earth orbiting the M-dwarf GJ 9689 with a period close to half the stellar rotation period“, recently appeared on the journal Astronomy & Astrophysics.

The image (click here to visualize the entire figure) shows a minimum mass vs. period diagram of all planets around M stars discovered with the radial velocity technique. The planets discovered in the framework of the HADES projects are marked in red, GJ 9689 d in black.