Discovered the first planetary system with planets both in equatorial and polar orbits revealed by the study: “The Rossiter-McLaughlin effect revolutions: an ultra-short period planet and a warm mini-Neptune on perpendicular orbits” of V. Bourrier (Observatoire Astronomique de l’Université de Genève), appeared on A&A 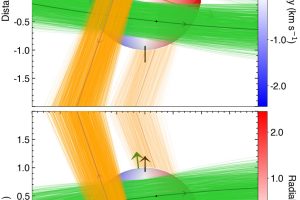 The study of the architecture of planetary systems, and in particular that of the spin-orbit angle (which is the inclination of the planetary orbit with respect to the stellar rotation axis) can unveil important details on the dynamical evolution of planetary systems. In particular, young planets typically migrate radially, changing their distance to the host star and interacting with the other bodies of their planetary systems. This process can also affect the spin-orbit angle of the planets. This may occur because the disc of gas and dust from which the planet is forming (the protoplanetary disc) is itself deformed or inclined, or as a consequence of the gravitational interaction between the planetary system and a nearby star, or among the planets of the system itself during the radial migration.

A powerful method to derive the inclination of the orbit of transiting exoplanets (which are planets that, during their orbit, pass in front of their star along our line of sight) is by studying the Rossiter-McLaughlin effect. This effect consists in a deformation of the profile of absorption lines in stellar spectra due to the transit of the planets across the rotating stellar surface. From the analysis of this effect it is thus possible to derive the geometry of a planetary system with transiting exoplanets.

The team of researchers led by V. Bourrier (Observatoire Astronomique de l’Université de Genève) recently presented a new method aimed at analyzing the Rossiter-McLaughlin effect in planetary systems hosting more than one exoplanet. This method consists in the simultaneous fit of the local lines from regions of the stellar surface occulted by all transiting exoplanets in a system, possibly combining data acquired with different spectrographs for each planet. As a test, the authors have applied their method to the system orbiting around the star HD 3167, at a distance of about 155 light years from Earth. The system hosts three planets: HD 3167b is a super-Earth with a mass of about 5 Earth masses and with an orbital period of just 0.96 days; HD 3167c is a mini-Neptune with a mass of about 9.8 Earth masses and an orbital period of about 30 days; HD 3167d has a mass of about 7 Earth masses and it is not a transiting exoplanet. The observations were obtained from ESPRESSO, mounted on the Very Large Telescope of the European Southern Observatory, for HD 3167b, and with HARPS-N, mounted on the Telescopio Nazionale Galileo of the Italian Institute for Astrophysics, for HD 3167c. The study has revealed that the planetary system of HD 3167 has a complicated architecture, with HD 3167b being on an equatorial orbit, while HD 3167c on a polar orbit. This complex geometry, observed for the first time in an exoplanetary system, is a consequence of the different dynamical evolution of the two planets, with HD 3167b still keeping its primordial orbit, which coincides with that of the protoplanetary disc, while the orbit of HD 3167c has been inclined by the secular gravitational interaction with other objects. The study is described in the paper: “The Rossiter-McLaughlin effect revolutions: an ultra-short period planet and a warm mini-Neptune on perpendicular orbits“, recently appeared on Astronomy & Astrophysics, with the collaboration, among the others, of G. Micela (INAF – Astronomical Observatory of Palermo)

The figure (click here to visualize the entire image) shows the orbital solution for the planets in the HD 3167 system. The rotation axis of the star is marked with a black arrows, while the stellar surface is colored according the radial velocity signal due to rotation (with the blue part moving toward the observer and the red part moving away). The stellar equator is marked with a black line. The possible orbits of  HD 3167b and HD 3167c are marked with green and brown lines, respectively.