A new model developed in OAPA connects for the first time supernovae, progenitor and the properties of the remnant SN 1987A 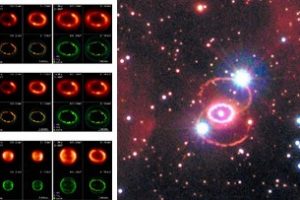 Stars more massive than 9 solar masses end their evolution in spectacular supernova explosions. These explosions are triggered by the gravitational collapse of the core of such massive stars, once the thermonuclear reactions are exhausted and the core is not supported against gravity by the pressure produced by the reactions. Supernovae are not simple spherical explosions, but rather complex phenomena characterized by complicated and energetic processes, such as the transformation of the core into a neutron star, the formation of a blast wave due to the fallback of the material falling onto the surface of the neutron star, the production of an intese flow of neutrinos that carries outward about 99% of the total energy of the supernova and, after being absorbed by the dense material surrounding the neutron star, ejects most of the material outward, etc…

These processes can not be directly observed, both because they occur in the core of the exploding massive stars, and because of the rarity of such events (it is estimated that the Milky Way hosts on average two supernovae each century). However, our knowledge of the physics involved in supernova explosions can be tested by studying the supernova remnants, e.g. the expanding clouds produced by the supernova explosions. The most suitable astrophysical object for these studies in SN 1987A, a supernova remnant produced by a supernova exploded on 1987 in the Large Magellanic Cloud, at a distance of about 160000 light years from us. This is in fact the only event for which we observed both the progenitor star before the explosion (Sanduleak −69° 202), the supernova, and the formation and evolution of the remnant.

The astrophysicists of the Astronomical Observatory of Palermo have studied intensively SN 1987A, both with a theoretic and an observational approach. The last of these studies is described in the paper: “Hydrodynamic simulations unravel the progenitor-supernova-remnant connection in SN 1987A” of S. Orlando (INAF – Astronomical Observatory of Palermo), recently appeared on Astronomy & Astrophysics. In this paper it is presented the first model ever produced connecting the progenitor star of SN 1987A, the complex phases immediately after the core-collapse of the supernova explosion, and the formation and evolution of the supernova remnant. Among the tested models, the one that better fits the observed properties of SN 1987A describes the progenitor star as a blue supergiant formed by the merging of two massive stars. Besides, the model predicts that the explosion was strongly asymmetric, with most of the energy emitted along an axis almost lying on the stellar meridian (inclined about 40 degrees with respect the line of sight). This would explain the presence of dense blobs of material expelled by the supernova (the ejecta), rich of Iron, Titanium and Nichel and observed with velocities >3000 km/sec. This asymmetry should have provided a strong kick to the neutron star of about 300 km/sec to the North toward the observer.. The neutron star has not been found to date, mainly because of the high absorption in direction of the center of SN 1987A. The astrophysicists F. Bocchino (INAF – Astronomical Observatory of Palermo) and both M. Miceli and G. Peres (University of Palermo and INAF-OAPA) are co-authors of the study.

The image (click here to visualize the entire figure) show synthetic maps of intensity of the X-ray emission of SN 1987A, obtained from the model that better reproduce the observed property of the remnant.

Trough the following links it is possible to see 3D models for virtual reality of SN 1987A and the simulations presented in this work, prepared by the INAF-OAPA astrophysics as part of the project 3DMAP-VR: