A new diagnostic tool to select metal-rich ejects in SNR 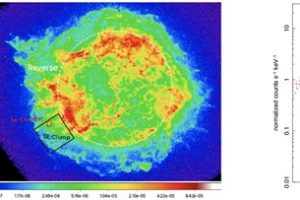 Supernova remnants are nebulae created by supernova explosions. These expanding clouds are formed by the interstellar medium shocked and heated up by the expanding shock produced by the explosion, and the knots of material launched by the exploding star, called ejecta. These ejecta are located behind the expanding shock, traveling with lower velocity, and they are heated up by the reverse shock: a shock travelling slower, sometimes even inward, produced by the interaction between the shock and the interstellar medium. Both the medium and the ejecta have temperature of million degrees, emitting in X-rays.

The study of the chemical abundances of the ejecta allows us to probe the synthesis of heavy elements occurring inside the exploding star, and both during the supernova explosion and in the supernova remnant. However, the X-ray spectroscopic instruments available to date do not have the resolution necessary to discern between the spectroscopic contribution of the ejecta from that of the shocked medium. This hampers our capability of drawing final conclusions about the chemistry of the ejecta and the synthesis of heavy elements in these objects.

The team of researchers led by E. Greco (University of Palermo; INAF – Astronomical Observatory of Palermo; Anton Pannekoek Institute for Astronomy, University of Amsterdam) have analyzed in details the mechanisms responsible for the emission of X-rays in supernova remnants, mainly the Bremmstrahlung emission from particles whose motion is deviated by local electric fields, free-bound atomic recombination emission, and bound-bound atomic transitions, searching for some feature unambiguously associated with metal-rich ejecta. The team has succeeded in defining a new diagnostic tool to select metal-rich ejecta, and they applied their new method to the supernova remnant Cas A. This research is described in the paper: “Unveiling pure-metal ejecta X-ray emission in supernova remnants through their radiative recombination continuum“, recently appeared on Astronomy & Astrophysics. Among the coauthors, the astronomers S. Orlando and F. Bocchino (INAF – Astronomical Observatory of Palermo), together with M. Miceli and G. Peres (University of Palermo and INAF – Astronomical Observatory of Palermo).

The figure (click here to visualize the entire image) shows a count-rate image of Cas A in the 0-3-7 keV band (X-ray band), with marked the regions analyzed in the study and the actual position of the reversed shock.