X-rays and EUV radiation affect the chemistry of planetary atmospheres and the stratification of molecules such as water, CO, CO2, and hydrocarbons 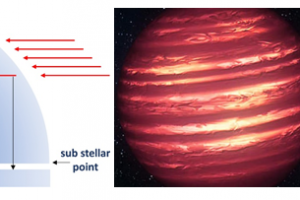 Some of the 4903 exoplanets discovered and confirmed so far (https://exoplanets.nasa.gov/) orbit very close to their stars. We learnt with the very first planet discovered around a star different than the Sun (51 Pegasi b, discovered in 1995) that planets with very close orbits are possible in nature. 51 Pegasi b, in fact, orbits at about 0.05 Astronomical Units (AU, 1 AU is the mean Sun-Earth distance, equal to 150 million km), slightly more than one tenth of the distance between Mercury and the Sun.

With such a close distance from their stars, these planets are strongly affected by the intense incident stellar radiation. In particular, intense incident EUV (extreme ultraviolet) and X-ray radiation has important effects on planetary atmospheres, being able to ionize atoms and molecules in the outer atmospheric layers. Photons with longer wavelength (such optical and IR radiation) simply are not energetic enough to be absorbed by atoms removing one or more electrons.

The team led by the astronomer D. Locci (INAF – Astronomical Observatory of Palermo) recently presented a detailed analysis of the chemical reactions taking place in planetary atmospheres strongly irradiated by EUV and X-ray photons. From their study results that the two type of radiation have different effects on the planetary atmospheres. In fact, EUV photons are absorbed by the outer layers of gas ionizing molecules bearing hydrogen and helium atoms, while X-ray photons penetrate deeper, where they ionize heavier atoms. This results in the setting of two different regions in the atmosphere: an outer layer where ionization is dominated by EUV photons, and an inner zone where it is dominated by X-ray photons. However, there are other important differences. X-ray photons, in fact, create a cascade of electrons that produce secondary ionization events on hydrogen and helium-bearing molecules. All these processes, thus, modify the abundances and stratification across the atmosphere of the various molecules, such as water, CO, CO2, and hydrocarbons, which depart significantly from equilibrium. The study is described in the paper: “Extreme-ultraviolet- and X-Ray-driven Photochemistry of Gaseous Exoplanets“, recently appeared on the The Planetary Science Journal.

The figure (click here to visualize the entire image) shows how the density of the various molecules change as a function of pressure in the atmosphere, for different values of incident radiation: