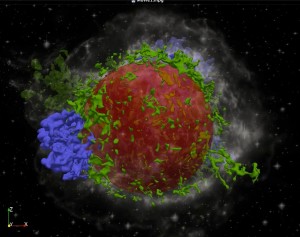 The project has been funded in the framework of the program “Progetti di Ricerca di Interesse Nazionale” (PRIN) of INAF 2014. It started in Febrary 2015 and will last two years. The project aims at studying
how pristine structures of the progenitor supernova, and the early interaction of the blast with the circumstellar medium, determine the final morphology of supernova remnants. For this study, very
accurate three-dimensional hydrodynamic and magnetohydrodynamic models are developed which describe the evolution of the blast wave
from the immediate aftermath of the progenitor supernova to the
interaction of the remnant with the surrounding medium.