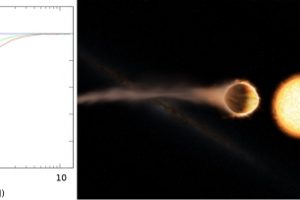 The stellar magnetic activity can produce an important emission of energetic X-ray and UV radiation. This emission is typically variable, both because the magnetic activity changes over short time scales, and because it decreases during stellar evolution. For instance, solar-type stars in the pre-main sequence phase (i.e. younger than 30 million years) are thousand times brighter in X-rays than main sequence solar-type stars (less than 10 billion years old). X-ray and UV stellar radiation can impact the surrounding stellar environment. This radiation, in fact, ionizes and dissociates the nearby gas, heating it up to several thousand degrees.

Among the about 4000 confirmed exoplanets, several are classified as hot Jupiters. These planets are gaseous giants orbiting close to their stars (i.e. with an orbital period shorter than 10 days). The atmosphere of the hot Jupiters which are orbiting around active stars can thus be irradiated by an intense X-ray and UV radiation. This occurs more frequently around young stars. In these cases, the planetary atmosphere is heated by the incident radiation and it starts evaporating in a thermal wind (photoevaporation process). In a few hot Jupiters, spectroscopic signatures of an evaporating gas have been observed.

In the study “Photo-evaporation of close-in gas giants orbiting around G and M stars” of D. Locci (INAF – Astronomical Observatory of Palermo), the photoevaporation of planets due to X-ray and UV radiation is analyzed by developing models of planets with an evaporating atmosphere. The adopted X-ray and UV radiation fields are typical of G and M stars with different age, and the evolution of the planets is followed until the radius-mass equilibrium is reached. Starting from an initial flat planetary mass distribution, the mass evolution of a significant fraction of exoplanets is affected by photoevaporation. In particular, 4% and 2% of planets orbiting around G and M stars, respectively, are completely evaporated in less than one billion years, while 1% and 2% of planets lost a significant fraction of their mass. The planetary mass distribution is thus affected by photoevaporation: Planets with a mass between 0.2 and 2 Jupiter masses are more frequent around young stars than around old stars. This study has been published on Astronomy & Astrophysics, with the collaboration of G. Micela and C. Cecchi-Pestellini (INAF – OAPA).

The figure (link) shows the initial planetary mass distribution (blue), and that at the equilibrium for planets orbiting around M (red) and G stars (green) shown separately.