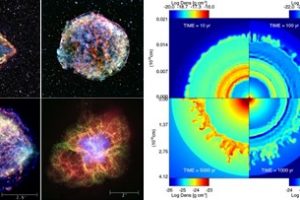 Supernova explosions, occurring and the end of the life of massive stars, are ruled by a complex physics, and they can not be described by a simple spherically symmetric geometry. The rarity of these events make even more difficult to understand the physical processes involved during the explosions. For instance, on average only one supernova explodes in our Galaxy every 50 years, and the supernova hosted by other galaxies are too distant to allow us to resolve the spatial details of the explosion.

The physical processes involved in the supernova explosions can be understood by analysing the supernova remnants, i.e., the clouds produced by the expanding gas ejected at velocity of thousands km/sec from the atmosphere of the exploding star. To this aim, supernova remnants must be close enough to allow us to resolve their spatial structure (closer than a few thousands light years) and young enough so that their spatial structure still preserve the imprint of the physical processes occurred during the explosion (only a few thousand years old). In our Galaxy, only a dozen of supernova remnants meet these criteria.

The 3D MHD simulations developed by the team led by the astronomer A. Tutone (University of Palermo and INAF – Astronomical Observatory of Palermo) have connected the morphology of supernova remnant with the geometry of the explosion of the progenitor. In fact, these simulations follow the first 5000 years of evolution of a supernova remnant produced by the explosion of a 20 solar mass red supergiant star, starting from the explosion itself. In case of a spherically symmetric explosion, i.e. without large scale anisotropies, the expanding remnant holds the onion-like structure typical of supergiants (the interior of these stars is made of concentric layers where different chemical elements are produced by thermonuclear reactions: light elements such as Helium in the outer layers and heavy elements such as Iron and Silicon in the inner layers). The homologous expansion is broken when the outer expanding layers of the remnant interact with the inverse shock moving inward. If large scale anisotropies are present in the exploding star, the chemical stratification of the remnant is not spherical, and the asymmetries in the remnant strongly depend on the hydrodynamic instabilities developing after the collapse of the stellar core and on the internal structure of the progenitor. In particular, heavy elements such as Iron, than in the progenitor star are abundant in the nucleus and the innermost shells, can populate in the remnant outer layers with respect the light elements. Such an inverted configuration has been observed in some Galactic supernova remnant. These elements, which are produced close to the nucleus in the star, probe the complex phases immediately after the collapse of the stellar core. For this reason, they can unveil important information on the physical processes occurring during supernova explosions.

The simulations are described in the paper “Three-dimensional modeling from the onset of the SN to the full-fledged SNR. Role of an initial ejecta anisotropy on matter mixing“, recently appeared on the journal Astronomy & Astrophysics. The astronomers S. Orlando, S. Ustamujic, F. Bocchino (INAF- Astronomical Observatory of Palermo and IASF), M. Miceli, E. Greco, e G. Peres (University of Palermo and INAF-Astronomical Observatory of Palermo), are coauthors of this study together with colleagues from Japanese institutions.

The figure (click here to visualize the entire image) shows the density distribution both in the case of a spherically symmetric explosion and when large-scale anisotropies are present. Both panels are split in four quadrants, each representing the configuration of the remnant after 10, 10, 1000 and 5000 years from the explosion.