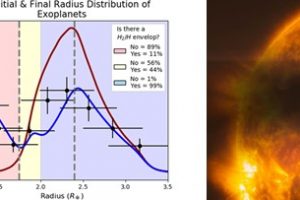 To date (2020 March 23rd) there are 4141 confirmed exoplanets in 3072 planetary systems, plus 5075 candidate exoplanets that still await to be confirmed (data from https://exoplanets.nasa.gov/). The number of known exoplanets is large enough to allow astronomers to study their global properties such as mass distribution, orbital parameters, planets dimension and composition, and to put them in relation with the properties of the central stars. Stars, in fact, can affect the properties of their planets in several ways. For instance, their UV and X-ray radiation can affect the environment where planets form, can evaporate part, or the entire atmosphere of close-in planets, or can affect their chemistry.

The bimodal distribution of exoplanetary radii is typically explained as an effect of the planetary formation process. In his study “The Bimodal Distribution in Exoplanet Radii: Considering Varying Core Compositions and H2 Envelope’s Sizes”, recently appeared on The Astrophysical Journal, the astronomer D. Modirrousta-Galian (INAF- Astronomical Observatory of Palermo) presents an alternative explanation. According to this study, the bimodal distribution of exoplanetary radii is a consequence of the irradiation of planets by the UV radiation emitted by their central stars, and the subsequent mass-loss from the heated atmosphere. In their simulations, the authors have followed the evolution of 106 synthetic planets irradiated by the UV radiation emitted by their central star. This radiation is drawn from the known UV emission of stars as a function of their masses. These simulations are able to reproduce the observed bimodal distribution of planetary radii if the distribution of planetary mass declines above 8 Earth masses and below 3 Earth masses. The astronomers G. Micela e D. Locci of INAF – Astronomical Observatory of Palermo are co-authors of the study.

The figure (click here to see the entire image) shows the known bimodal distribution of planetary radii, with the distribution obtained with these simulations.