Thermal inversion in the atmosphere of a ultra-Hot Jupiter. The study: “Neutral Iron Emission Lines from the Dayside of KELT-9b: The GAPS Program with HARPS-N at TNG XX” of Pino L. (INAF/OA Arcetri; University of Amsterdam) recently appeared on ApJ 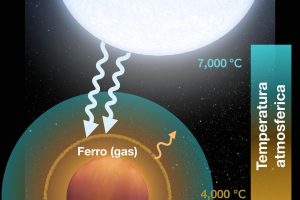 Hot Jupiters are gaseous planets orbiting very close to their stars, typically closer than 0.1 Astronomical Units (the average distance between Earth and Sun), and with very short orbital periods of days or even hours. An extreme sub-class of these planets are the ultra-Hot Jupiters. These planets are tidally-locked to their stars (which means that they show always the same face to their stars), and in their day-time side temperature exceeds 2500 degrees.

The study of the atmospheres of these planets is particularly interesting for their extreme conditions compared with the other classes of exoplanets. Planetary atmospheres are studied with spectroscopic observations aimed at observing lines produced by abundant elements. For instance, in the Hot Jupiters molecules of TiO and VO are particularly important for the thermal stratification of these atmospheres since they efficiently absorb stellar radiation. Ultra-Hot Jupiters are so hot that these molecules are dissociated. Heating in their atmospheres is then mainly regulated by Iron atoms, whose bound-bound and bound-free transitions absorb photons with wavelength longer and shorted than 0.3 μm, respectively.

The international team of researchers led by the astronomer Pino L. (INAF-OA Arcetri; Anton Pannekoek Institute for Astronomy, University of Amsterdam) has analyzed high resolution spectra of the ultra-Hot Jupiter Kelt-9b acquired before the secondary eclipse (e.g., before the planet was moving behind the star with respect to the line of sight) with the spectrograph HARPS-N mounted at the Telescopio Nazionale Galileo (TNG), as part of the GAPS program (Global Architecture of Planetary System). The observations during the secondary transit are optimal to detect emission lines from the planetary atmosphere, and in fact the team has observed for the first time emission lines of neutral Iron from the atmosphere of an exoplanet. These lines are produced by Iron atoms populating layers of Kelt-9b atmosphere between 10-3 and 10-5 bar. This is compatible with models extrapolating the thermal stratification of atmospheres where heating is dominated by the absorption of stellar radiation by Iron atoms, predicting a thermal inversion occurring at about 10 mbar. The study is described in the paper “Neutral Iron Emission Lines from the Dayside of KELT-9b: The GAPS Program with HARPS-N at TNG XX“, recently appeared on the The Astrophysical Journal, with the collaboration of the astronomers L. Affer, S. Benatti, A. Maggio, G. Micela (Principal Investigator of the HARPS-N observations of Kelt-9b) and J. Maldonado of INAF-Astronomical Observatory of Palermo.

The figure (click here to visualize the entire image) shows a schematic view of Kelt-9b and its star. The planet receives a strong irradiation from its star (blue arrows). The neutral Iron in the atmosphere (orange circle) absorbs the stellar radiation, heating the region up to 4000 degrees. This energy is only in part released as radiation (orange arrows), which contributes to heat the outer layers of the atmosphere up to 7000 degrees.