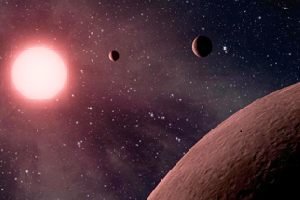 Exoplanets research has a wide appeal on the public and the scientific community. This mainly thanks to the results of successful missions such as CoRoT and Kepler, which allowed us to identify to date 3610 exoplanets, with more than 2000 candidates (link). However, the search for exoplanets is only part of this important branch of astrophysics, which faces several important questions still without answer:

The search for exoplanets and their characterization is a very challenging science, both from the theoretical approach and data analysis. This pushed the exoplanets community to develop sophisticated instruments and techniques for data analysis. The most effective methods adopted to date to search for exoplanets are transit and radial velocity. The former consists in the observation of small fading of stellar light when planets pass in front of them during their orbit. However, planets are typically much smaller than the hosting stars. For instance, the section of the largest planet in the Solar System, Jupiter, is only one hundredth of that of the Sun. Thus, the variation of stellar light during planetary transit is typically small: about 1-2% when the transiting planet is a hot Jupiter.

The other technique for the search and study of exoplanets is radial velocity. The basic concept here is the fact that during the orbit of a planet around the star, the star itself oscillate around its position. These oscillations can be detected thanks to the Doppler effect: when a source of some wave is moving with respect the observer, the observed wavelength is shifted with respect that at rest. The shift itself depends on the relative velocity between source and observer. Doppler effect affect also the light emitted by stars oscillating because of their planets: the observed wavelength increases when the star is receding from us, while it decreases when the star is approaching. In principle, it is then possible to identify stars with exoplanets observing periodic oscillations of the central wavelength of given spectral lines in the stellar spectra. However, how intense is the Doppler effect induced by an orbiting planet on the spectrum of the hosting star? well..not so much: typical oscillations are around 1 m/sec…less than the velocity at which men walk…. 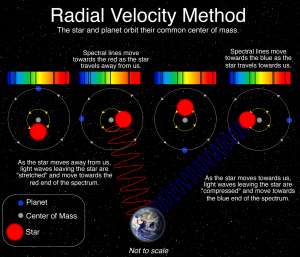 To detect such small shifts it is thus necessary to use spectrographs with very high spectral resolution. To achieve this goal, in the 2012 the spectrograph HARPS-N (link) has been mounted at the Telescopio Nazionale Galileo (TNG). HARPS-N operates in the optical band (383-690 nm) with a spectral resolution of 115000, which corresponds to a velocity resolution of 0.6 m/s. In order to fully take advantage of such a powerful instrument, the Italian exoplanets community, spread in several institutions, should have to be coordinated in a unique project. This was the motivation for GAPS (Global Architecture of Planetary Systems).

GAPS was defined for the first time during the meeting in Catania in March 2012, with the participation of astronomers from Torino, Milano, Padova, Trieste, Napoli, Catania, Palermo and the “Fondazione Galileo”, leading the TNG. During the same year, TNG TAC approved GAPS and the first observations were included in the AOT26 cycle, started on September 2012. This was the beginning of a frenetic observing activity, culminating in August 2016 in 314 observing nights dedicated to GAPS, for a total of 7162 spectra taken. Other 1525 spectra have been acquired thanks to the collaboration with the Spanish EXOTEAM project. 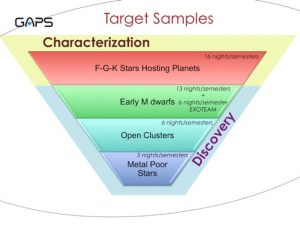 The main objective of GAPS is the characterization of known exoplanetary systems, in order to understand their formation and evolution. The project runs mainly along two different research lines: i) The study of the frequency of rocky planets with respect the properties of the hosting star (mass, metallicity, environment, etc..); and ii) the determination of the physical properties of planets, their orbits, and those of the hosting star.

The large number of publications to date related to GAPS (21 papers on peer reviewed journals) demonstrates its success. The topics of published GAPS paper are:

GAPS team initially counted 50 members among the Italian community. Today it is composed by 61 members from Italian institutions, 2/3 senior astronomers and 1/3 postdocs, together with the collaboration of 21 foreign astronomers. The Astronomical Observatory of Palermo (OAPA) is deeply involved in GAPS, with an important role in the organization of the project, the study of rocky planets around M stars, the stellar activity, and the global architecture of exoplanetary systems. OAPA’s team is composed by Giuseppina Micela ed Antonio Maggio, members of the GAPS board and, together with Laura Affer and Sabrina Masiero, of the GAPS Science Team. Other astronomers of the OAPA’s GAPS team are: Loredana Prisinzano, Cesare Cecchi Pestellini, Angela Ciaravella, Francesco Damiani,  Mario Damiano, Antoni Garrido, Ester Gonzalez Alvarez, Daniele Locci, Jesus Maldonado,  Ignazio Pillitteri e Tiziano Zingales.

Palermo recently hosted the 10th GAPS Process Meeting, from May 15th to 17th. A total of 48 astronomers participated to the meeting to discuss about the scientific results and future development of GAPS. The scientific activities have been interrupted only during the visit to the International Institute for Astronomy Gal Hassin in Isnello. Thanks to the research activity of the astronomers of the Astronomical Observatory, Palermo has today a key role in the international research for exoplanets.