Two Neptunians for a young star. The study: “The GAPS Programme at TNG XXVIII. A pair of hot-Neptunes orbiting the young star TOI-942” of I. Carleo (Wesleyan University/INAF-OAPd) recently appeared on su A&A) 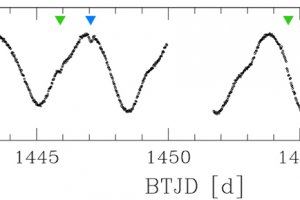 The exoplanetary systems discovered so far (3212 systems with a total of 4331 exoplanets, as reported by https://exoplanets.nasa.gov/ on January 21st 2021) show a great variety of systems architecture, with some configurations which are completely different than that of our Solar System. This variety of architectures is a challenge for studies of the planetary formation process and all mechanisms that contribute in shaping the final configuration of planetary systems.

In this contest, it is very important to discover exoplanets orbiting around young stars (i.e. younger than 100 million years). Such systems, in fact, allow us to study exoplanets that only recently emerged from the protoplanetary disk in which they formed, and they can still undergo the process of radial migration, which is due first to interaction between the newborn planets and their disks, and then by the gravitational interaction between the planets of the same system. Besides, young stars are bright X-ray and UV sources. This radiation arises from the magnetic activity of these stars, and it can have important consequences on the chemical evolution of planets and their atmospheres. However, to date only a handle of planets orbiting around young stars are known: 5 planets discovered by TESS (Transiting Exoplanet Survey Satellite), together with a system hosting 4 exoplanets orbiting around a 23 million years old star and an exoplanet orbiting around a 5-10 million years star, both discovered by Kepler/K2.

Thanks to the research led by the astronomer I. Carleo (Astronomy Department and Van Vleck Observatory, Wesleyan University and INAF – Astronomical Observatory of Padua), the family of exoplanets orbiting around young stars now has two new members: two Neptunians orbiting around the star TOI-942, classified by the authors as a K2.5V star with an age between 30-80 million of years. Given its young age, TOI-942 as a short rotation period of only 3.4 days and an intense magnetic activity, producing energetic radiation inducing a significant mass loss from the planets atmospheres. From the analysis of the TESS light curves of TOI-942 (e.g., brightness variation with the time), together with observations obtained with SuperWASP (a telescope designed for the search of exoplanets), REM telescope (Rapid Eye Mount) of the European Southern Observatory, and the spectrograph HARPS-N mounted on the Telescopio Nazionale Galileo, the team led by I. Carleo has confirmed the presence of the two exoplanets orbiting around TOI-942. They have also estimated the upper limits of the mass of the two planets (16 and 37 Terrestrial masses), their radii (4.2 and 4.8 Terrestrial radii), and their orbital periods equal to 4.3 and 10.2 days. The planetary system of TOI-942 is thus the youngest system discovered with TESS so far. The study is described in the paper: “The GAPS Programme at TNG XXVIII. A pair of hot-Neptunes orbiting the young star TOI-942“, recently appeared on Astronomy & Astrophysics. Among the coauthors, the astronomers D. Locci, G. Micela, L. Affer, S. Benatti, A. Maggio e J. Maldonado of INAF – Astronomical Observatory of Palermo.

The figure (click here to visualize the entire image) shows the light curve of TOI-942 measured by TESS. The blue and green arrows show the transits due to the exoplanets  TOI-942b e TOI-942c.