The discovery and characterization of small, rocky planets with the potential capability of hosting life is one of the major scientific endeavours of modern Science. While most of the planets discovered so far have been found orbiting around solar-type stars, low-mass stars have recently been recognized as a “shortcut” to glance into an exo-life laboratory.

Low-mass stars show significant advantages in the search for small rocky planets with respect to solar-type stars: their smaller masses lead to a larger induced radial-velocity variations; their habitable zones are closer to the stars improving the likelihood of a transit and its frequency; and because of their smaller radii, transits are expected to be deeper. Moreover, M-dwarfs constitute the most abundant population of stars in the Milky Way / vicinity of the Sun.

The radial velocity searches currently ongoing with HARPS at La Silla and HARPS-N at the Telescopio Nazionale Galileo within the framework of the Global Architecture of Planetary Systems project (GAPS) are producing a large quantity of high-resolution and high signal to noise ratio spectra of the targets that are being monitored. Unfortunately, determining accurate stellar parameters for M dwarfs using optical spectra has proven to be a difficult task. Their optical spectrum is covered by a forest of molecular lines, in particular TiO and water bands, hiding or blending most of the atomic lines traditionally used in the spectral analysis of solar-type stars.

Exoplanet searches would benefit from a methodology to determine accurate stellar parameters using the same spectra that is being used for the radial velocity determinations (i.e., without applying to IR facilities, nor relaying on atmospheric models, nor on photometric calibrations).

In this line, we have developed a technique to calibrate empirical relationships to determine stellar parameters  (effective temperatures, metallicities, and spectral types) of early M dwarfs (spectral types M0-M4) by using ratios of pseudo equivalent widths of features and combinations of pseudo equivalent widths and ratios (see Fig. 1). We also provide empirical relationships for the stellar mass, radius, and surface gravity.

To get the latest version of the code: e-mail me at

NOTE:  This code was developed for HARPS / HARPS-N spectra. We caution that our methods are untested or unreliable on other spectrographs. 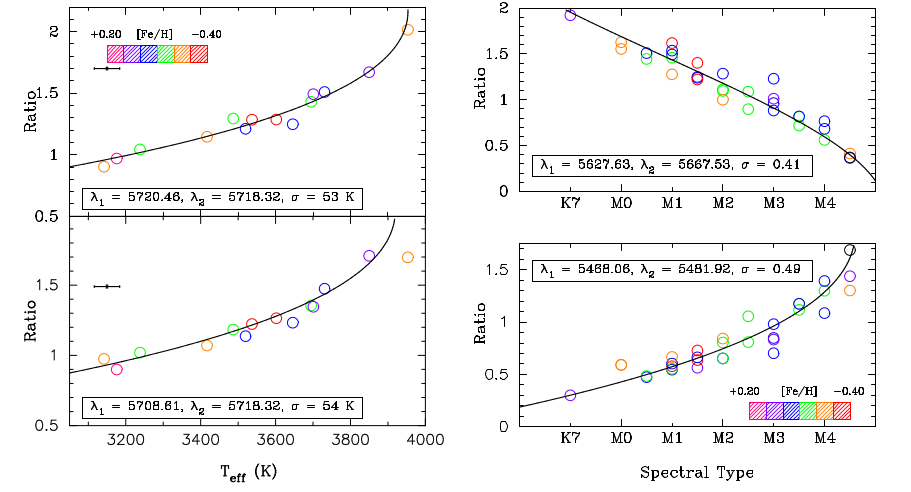 Fig. 1. Left: Examples of some features identified to be sensitive to Teff in early-M dwarfs. Right: Spectral type as a function of two different spectral-type sensitive ratios. Stars are plotted using different colours according to their metallicity. The corresponding fits are shown. The features’ central wavelengths as well as the rms standard deviation of the residuals are given in each plot. Figure updated from Maldonado et al. 2015.