The first detection of a stellar coronal mass ejection 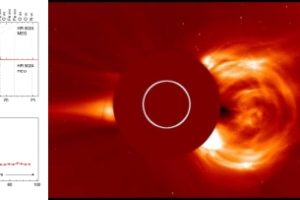 The Sun has an intense magnetic activity which produces transient phenomena such as flares, coronal mass ejections (CMEs), sunspots, etc…, with CMEs being the most energetic phenomena associated with the solar magnetic activity. CMEs consist in rapid ejections of coronal plasma, which are triggered by the recombination of the magnetic field lines that also produce solar flares. During solar flares, in fact, the plasma at several million degrees is confined into magnetic loops. When these magnetic structures brake up, the plasma can be launched in the interplanetary space with a velocity ranging from 200 to 2000 km/sec.

The Sun is the only star close enough to us to allow us to observe with great spatial and temporal resolution CMEs and flares. Given the large distance of the other stars, in fact, direct observations of stellar CMEs are impossible. However, with high resolution X-ray spectroscopy, it is possible in principle to measure the Doppler shift due to the motion of the hot plasma which evaporates from the chromosphere during stellar flares, and then falls again onto the star during the flare decay and that is eventually ejected in a CME.

This is the strategy adopted by the international team of researchers led by C. Argiroffi (University of Palermo, INAF – Astronomical Observatory of Palermo) to observe the first stellar CME ever detected. By analyzing a time series of high resolution X-ray spectra obtained with HETGS on board on the Chandra satellite of the active star HR 9024, a G1 III giant 450 light years away from us, the team has measured the motion of 10-25 million degrees plasma evaporating from the chromosphere and then falling onto the star with a velocity of 100-400 km/sec during a stellar flare. This has been followed by the motion of 4 million degrees plasma moving away from the star with a velocity of about 90 km/sec. This is the first detection of a stellar CME associated with a bright flare. The astronomers F. Reale, M. Miceli e G. Peres (UNIPA/OAPA) and S. Orlando, R. Bonito, e A. Ciaravella (OAPA), are coauthors of the study. The discovery is described in the paper “A stellar flare-coronal mass ejection event revealed by X-ray plasma motions“, recently appeared on Nature Astronomy.

The figure (link) shows a scheme of the CME occurred on HR 9024.