A sub-Neptunian exoplanet around the star GJ 720 A. The study: “HADES RV Programme with HARPS-N at TNG XIII. A sub-Neptune around the M dwarf GJ 720 A” of E. González-Álvarez (CSIC-INTA) recently appeared on A&A 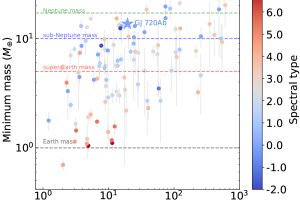 About 19.3% of the 4001 exoplanets confirmed to date were discovered with the technique of the radial velocity (from https://exoplanets.nasa.gov/). This method consists in using time series of spectroscopic observations in order to measure the periodic oscillations of the position of stars due to the presence of orbiting exoplanets. In fact, in a planetary system both the planets and the star orbit around the common center of mass. This method thus allows to measure the radial component of the velocity at which the star oscillates around the center of mass of the star-planets system.

One of the major intrinsic difficulties of this method is discerne between the signal due to presence of planets from those due to the phenomena related to the stellar magnetic activity, such as the photospheric spots. Several techniques were developed to this aim. These methods typically requires simultaneous spectroscopic observations in optical and infrared bands or the analysis of both spectroscopic and photometric observations.

The study: “HADES RV Programme with HARPS-N at TNG XIII. A sub-Neptune around the M dwarf GJ 720 A“, recently appeared on the journal Astronomy & Astrophysics, describes the study led by the astronomer E. González-Álvarez (Centro de Astrobiología, Madrid) which is based on the search and analysis of radial velocity signals in spectroscopic observations of the star GJ 720 A. These observations were acquired with the spectrograph HARPS-N, mounted on the Italian Telescopio Nazionale Galileo, in the framework of the project HADES (HArps-n red Dwarf Exoplanet Survey), which is aimed at finding exoplanets around M type stars. GJ 720 A is in fact a M0.5V star, about 50.7 light years from us, which is also part of a wide binary system. The study revealed three periodic signals. Thanks to photometric observations from which the authors obtained the stellar light curve (which is the time variability of the brightness of the stars in the optical bands), it was possible to understand that two of these signals were due to stellar activity: one with a period od about 35 days is due to stellar rotation, while another, with period of about 100 days, it is likely related to the lifecycle of magnetically active regions. The third signal, with a period of 19.5 days, in instead due to the presence of a planet orbiting around the star. According to the estimate of its minimum mass (13.6 Earth masses), the planet has been classified as a sub-Neptunian, orbiting on a circular orbit with radius equal to 0.12 Astronomical Units (AU, 1 AU is the average Earth-Sun distance, equal to 150 million km), lying inside the habitability zone of the star (which is the region around the star where a planet can host liquid water on its surface). The astronomer A. Petralia, G. Micela, J. Maldonado, L. Affer, and A. Maggio of INAF – Osservatorio Astronomico di Palermo are among the coauthors of the study.

The figure (click here to visualize the entire image) shows a scatter plot of the minimum mass vs. orbital period of all super-Earth and sub-Neptunians discovered with the radial velocity technique, together with GJ 720 Ab. The spectral type of the central stars is coded with different colors, going from K0.5V (-2) to M7.0V (7).