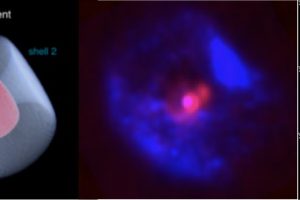 LBV (Luminous Blue Variable) stars are massive and unstable stars characterized by large mass-lost due to intense stellar winds and aperiodic bursts. Due to their instability, LBV stars are also variable, with quasi-periodic oscillations of their luminosity of the order of 0.5-2 magnitudes. Typical examples of this class of stars are: the supergiant S Doradus in the Large Magellanic Clouds, one of the most luminous stars known; the star Eta Carinae, surrounded by the Homunculus, a cloud formed during a burst occurred about 7500 years ago; and the blue supergiant ζ Scorpii, in the Scorpius constellation.

Commonly accepted evolutionary models predict that LBV stars are a transient phase during the evolution of massive stars, leading to the formation of Wolf-Rayet stars (WR), which are massive and hot stars (with effective temperatures in excess of 30000 K) that expelled most of their hydrogen-rich outer envelope. However, recent models suggest that LBV stars can also be the progenitor of certain type of core-collapse supernovae explosions before reaching the WR stage. This hypothesis would allow to explain the existence of supernova remnants, such as SN 2005gl observed in the barred-spiral galaxy NGC266, where the shock wave expands into a dense and non symmetric circumstellar medium, typically produced by LBV stars.

In her recent study, the astronomer S. Ustamujic (INAF – Astronomical Observatory of Palermo) developed a 3D hydrodynamic model of a supernova explosion triggered by a LBV star, which follows the evolution of the material ejected by the explosion (the ejecta) for 10000 years. The aim of this simulation is to identify specific chemical and morphologic characteristics of supernova remnants that would allow astronomers to discerne those produced by the explosions of LBV stars. The model is based on the properties of the LBV star Gal 026.47+0.02, which lie at about 21000 light years from us, is million times more luminous than the Sun and with an effective temperature of 17000 K. The star loose mass with a rate of about 0.0001 Solar masses per year, forming two dense shells with the shape of a torus in the equatorial plane, observed in radio and infrared observations. The model reproduced the interaction between the expanding shock wave and the two shells, and the consequent formation of two elongated structures along the axis perpendicular to the tori. Besides, as a function of the energy released by the supernova (between 1 and 12×1051 erg), it is possible that the supernova remnant shows peculiar chemical properties, with the internal ejecta being rich in Iron and those along the elongated structure rich in Silicon. These characteristics are observed in some supernova remnants, such as W50, SNR G309.2-00.6, SNR W44, and SNR S 147, which, accordingly to this model, may have been formed by the explosion of LBV stars. The study is described in the paper: “Modeling the remnants of core-collapse supernovae from luminous blue variable stars“, recently appeared on the journal Astronomy & Astrophysics, which is the result of a collaboration of astronomers of the Italian National Institute of Astrophysics (INAF).

The figure (click here to visualize the entire image) shows the morphology of the ejecta rich in Iron (orange), Silicon (green), and Oxygen (blue) predicted by the model of the most energetic supernova explosion (12×1051 erg). Each panel shows a different moment of the evolution of the supernova remnant, with the time increasing from the top to the bottom panels. Each column shows the results obtained from a different model, e.g. including for two different values of the mass of the exploded star (60 or 80 Solar masses) and initial rotation (0 and 300 km/s). The semitransparent surface shows the position of the shock wave, while the yellow semitransparent surface that of the reverse shock.