A chapter wrote by M. Barbera, U. Lo Cicero and L. Sciortino (INAF-OAPA) on the filters for X-ray telescopes is included in the: “Handbook of X-ray and gamma ray astrophysics” 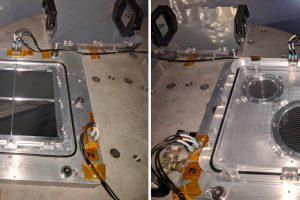 X-ray astronomy explores the high-energy Universe. X-rays are, in fact, high energy photons emitted by very hot gas (with temperature of some milion degrees) or by processes involving relativistic particles. Some astronomical sources of X-rays radiation are: accreting black holes, such as the supermassive black holes at the center of active galaxies, stellar coronae, supernova remnants, and clusters of galaxies.

However, there are several intrinsic complications that must be faced for the development of a X-ray telescope. First, Earth atmosphere is opaque to X-rays, which means that these telescopes must be mounted on satellites. Besides, X-ray telescopes require a specific design in order to focus such energetic photons, and allow the detectors at the focus to capture them and measure their properties. Aboard of currently operating X-ray telescopes, such as Chandra of NASA and XMM/Newton of ESA, the detectors are CCDs (Charge-Coupled Device), similar to that of every telephones camera. In these devices, a charge is accumulated in each pixel that is hit by a X-ray photon. The amount of accumulated charge is proportional to the energy of the incident photon, and thus, when the instrumentation reads the amount of accumulated charge, it provides a measure of this energy. Future X-ray telescope will use instead microcalorimeters. The sensitive surface of these devices produces heat after the incidence of a X-ray photon. The increase of temperature (which is in the order of a few thousandths of one degree) is read by another component called “thermistor“, whose resistance changes as a consequence of the increased temperature.

However, X-ray detectors produce spurious signals even when they are hit by photons of different bands, such as UV, visible, and infrared. This spurious signal may contaminate the measurements and degrade the accurancy of the photons energy determination. For these reasons, X-ray telescopes are equipped with filters aimed at blocking the contaminating radiation. The main requirements for these filters are: 1) being transparent to X-rays, 2) being opaque to the other radiation, 3) being small and light, but also resistant to the mechanical and acustic stress during launch, 4) being able to block also the incoming charged particles, mainly those with low energy. The XACT facility of the Astronomical Observatory of Palermo is strongly involved in the development of the filters to be mounted on the X-ray telescope Athena of the European Space Agency, whose launch is planned for the early 30s. In particular, the facility is involved in the development of the filters for the X-IFU spectrometer, whose microcalorimeters while operate at very low temperature (about 100 mK). These filters (five filters mounted at various distances from the detector) will block the IR radiation emitted by the surrounding warmer surfaces, and they will be constituted of a polyimide 45 nm thin layer coated with a 30 nm layer of aluminium. Also filters for the WFI camera of Athena are under development in the XACT laboratory, which will be used to block UV and optical radiation. In the current design, two filters will be installed. One will be made of three layers (90 nm of alluminium, 30 nm of Si3N4 and 20nm of SiO2) deposited onto the detector surface, while the second one will be mounted on the filter wheel and it will be made of two layers: a 150 nm layer of polyimide plus a 30 nm layer of aluminium.

The importance of filters in X-ray telescopes, their development, and the technologies implemented in their construction for modern telescopes are described in the chapter “Filters for X-ray detectors on Space missions“, included in the handbook “Handbook of x-ray and gamma ray astrophysics”  (Springer Nature Singapore, Editors-in-Chief Cosimo Bambi of the Fudan University and Andrea Santangelo of the University of Tübingen). The authors of this chapert are Marco Barbera and Luisa Sciortino (University of Palermo and INAF – Astronomical Observatory of Palermo) and Ugo Lo Cicero (INAF – Astronomical Observatory of Palermo).