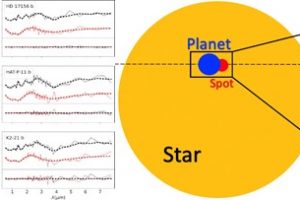 A “transit” occurs when we observe a planet moving across the disc of its star. Thus, during the transit the planet obscures a small portion of its star, slightly reducing its luminosity. While in the Solar System the only planets we can observe transiting in front of the Sun are Mercury and Venus, transits is still the most efficient method to identify exoplanets. To date, in fact, 76.1% of known exoplanets have been discovered with transits (https://exoplanets.nasa.gov/). The transit depth, which is the maximum dimming of stellar luminosity during the transit, depends on the square of the ratio between the planetary radius over the stellar radius. This means that the larger the planetary radius and the smaller the stellar radius, the larger the transit depth. However, the transit depth is always a small signal: about 1% when a gaseous giant planet transit in front of a low mass star, and a few 0.001% when the transit is produced by a rocky planet.

The transit depth is so small that it can easily be affected by other phenomena, such as the magnetic activity of the host star. In particular, the presence in the photosphere of dark spots (regions of the photosphere where the plasma is colder than the rest of the photosphere), which can dim stellar radiation when they are expose in the direction of the observer. If spots are present in the stellar photosphere during a transit, the depth of the transit is overestimated. On the other side, if the transiting planet also covers the spots, then the transit depth is underestimated. In both cases, the estimate of the planet radius is affected by the presence of spots during the transit.

Among the missions planned to study the exoplanets atmospheres in the near future,  ARIEL (Atmospheric Remote-sensing Infrared Exoplanet Large-survey) has been recently selected as fourth Medium Class Mission in the Cosmic Vision program of the European Space Agency. In a four-years mission, ARIEL will study the atmosphere of more than 1000 exoplanets thanks to both photometric and spectroscopic observations. The team of astronomers led by G. Cracchiolo (University of Palermo and INAF – Astronomical Observatory of Palermo) developed a method aimed at accounting for spots in the stellar photosphere observed in transmission spectra with ARIEL. The method, which is described in the paper: “Correcting the effect of stellar spots on ARIEL transmission spectra“, recently appeared on Monthly Notices of the Royal Astronomical Society, was tested by the team on three exoplanets selected among the list of ARIEL targets list (HD 17156 b, HAT-P-11 b, K2-21 b), demonstrating that this correction is necessary when the temperature difference between the photosphere and the spot is at least 1000 K. The coauthors of the study are the astronomer G. Micela of INAF – Astronomical Observatory of Palermo and prof. G. Peres of the University of Palermo.

The figure (click here to visualize the entire image) shows a schematic view of a transit during which there are spots in the photosphere. The zoomed image shows the geometric details of the configuration spot+planet.