The magnetic activity of the M star AD Leo 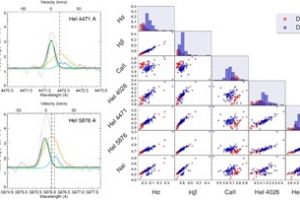 Stars which are not fully radiative (e.g., less massive than 8 solar masses) produce a magnetic field in their interior whose intensity and topology depends on the type of star and internal structure. The magnetic field is then drag toward the surface and here it interacts with the plasma in the photosphere, chromosphere, and corona triggering phenomena classified as “magnetic activity“. Phenomena such as spots and faculae in the photosphere, prominences and plagues in the chromosphere, flares and active regions in chromosphere/corona are the manifestation of the interaction between magnetic field and plasma in the stellar atmosphere.

These phenomena are often studied analyzing spectroscopic indicators of intense magnetic activity. This indicators are lines of elements populating regions where magnetic phenomena occur. For instance, the Hα Balmer line of Hydrogen and the CaII K line of Calcium singly ionized probe respectively plasma hotter than 7000 K in prominences and flares, and plasma at about 6000 K in regions, such as plagues, with intense magnetic field. Other important diagnostics of stellar magnetic activity are the lines CaII H, the neutral Sodium lines (i.e. Na I D1,2), and Helium lines (i.e. He I D3). Typical targets for studies of magnetic activity are the M stars. These stars are smaller and colder than the Sun (with a radius between 0.1 and 0.63 solar radii and an effective temperature of 800K – 2400K), but they constitute the richest available sample of stars in the solar neighborhood (about 75% of all stars). Besides, they are typically characterized by an intense magnetic activity, and for several M stars included in surveys aimed at studying exoplanets, long spectroscopic observations with high resolution are available.

The team of researchers led by the astronomer Claudia Di Maio (University of Palermo and INAF – Astronomical Observatory of Palermo) analyzed a long serie of spectroscopic data obtained with the HARPS spectrograph at the European Southern Observatory (33 observations acquired in 2006) and HARPS-N at the Italian Telescopio Nazionale Galileo (63 observations obtained in 2018 and 2019 in the framework of the project GAPS, Global Architecture of Planetary Systems) of the star AD Leo. It is a M star with an effective temperature of 3400K, a mass of 0.42 solar masses, an age of 25-100 million years, and distant from the Sun only 16 light years. The researchers have measured the flux and studied the profile of several lines which probe stellar magnetic activity, in order to analyze the correlations between different indicators. Besides, a very bright flares occurred during the HARPS-N observations. During the flare, several Hydrogen and Helium lines show a broadened and asymmetric profile, with a “redshift” component emitted by plasma moving in the opposite direction of the observer with a velocity of several tens of km/sec. This material is likely confined in the magnetic structures and it is moving toward the photosphere. The study is described in the paper: “The GAPS programme at TNG. XXVI. Magnetic activity in M stars: spectroscopic monitoring of AD Leonis“, recently appeared on the journal Astronomy & Astrophysics.