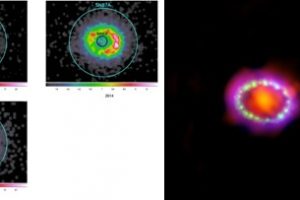 SN1987A, the supernova exploded in the Large Magellanic Cloud (at about 170000 light years of distance) on February 23rd 1987, was an iconic event for the study of supernovae and supernova remnants. In fact, it is the only case where it was possible to observe (with telescopes) the explosion and to follow with periodic observations the evolution of the supernova remnant and its interaction with the circumstellar material during its expansion. Besides, this is the only case where observations exist also for the progenitor, the blue hypergiant star Sanduleak -69° 202a, with a final mass of about 20 solar masses.

Despite the numerous existing observations of SN1987A across the entire electromagnetic spectrum, the central neutron star has not been identified so far. This is likely due to the fact that it lies behind some dense and cold cloud of material ejected during the explosion. However, important steps forward have been made in the recent years. On 2019, astronomers of the Cardiff University have analised observations made with ALMA (a telescope made of 66 antennae which observe in the millimetric band) of a blob of material in the core of SN 1987A, whose characteristics are compatible with that of a pulsar wind nebula, which is a cloud of particles acelerated up to relativistic velocities by the magnetic field of a neutron star. More recently, in the 2021, a study led by astronomers of INAF – Astronomical Observatory of Palermo, based on the analysis of X-ray observations of SN1987A, shown evidence of synchrotron emission (which is radiation emitted by relativistic particles moving across curved trajectories along intense magnetic fields) with energies between 10 and 20 keV. This result, which was compatible also with the presence of a pulsar wind nebula, has been contested in a following paper.

The study led by the astronomer E. Greco (Anton Pannekoek Institute for Astronomy, University of Amsterdam; INAF – Astronomical Observatory of Palermo), based on the analysis of X-ray observations acquired with the NASA satellites Chandra and NuSTAR and the ESA satellite XMM/Newton from 2012 to 2020, supports the presence of synchrotron emission from the center of the supernova remnant. Besides, the observed photon index (which describes the energy distribution of the detected photons emitted by the source) and the observed flux remained constant during the eight years of observations, which supports the presence of a pulsar wind nebula, and thus of a neutron star, in the core of SN1987A. The authors further confirmed this finding with the comparison of the observed spectra with synthetic spectra obtained from MHD models of the source published in 2020 by a team of astronomers of INAF – Astronomical Observatory of Palermo. The study is described in the paper: “Additional Evidence for a Pulsar Wind Nebula in the Heart of SN 1987A from Multiepoch X-Ray Data and MHD Modeling“, recently appeared on the journal “The Astrophysical Journal”. Among the coauthors, the astronomers S. Orlando, F. Bocchino, B. Olmi and V. Sapienza of INAF – Astronomical Observatory of Palermo, M. Miceli and G. Peres of the University of Palermo, together with astronomers of the RIKEN in Japan and the University of Amsterdam.

The figure (click here to visualize it interaly) shows the images of SN 1987 A obtained with the instrument ACIS-S onboard of Chandra in the energy band 0.1-8 keV. The black circle mark the central region where the pulsar wind nebula and the neutron star are expected to be. The cyan circles delimit the whole remnant.