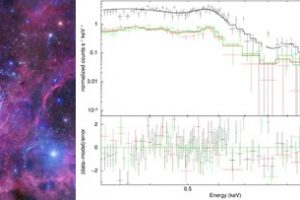 Supernova remnants are clouds in rapid expansion formed by supernova explosions. Typically, these remnants are very inhomogeneous. These inhomogeneity is the result of the interaction between the expanding remnant and the surrounding material, and, in particular when they are generated by core-collapse supernova explosions (which are the supernova triggered by the gravitational collapse of the cores of massive stars), also to anisotropies formed during the explosions. These anisotropies are thus intimately connected to the physical processes occurring during the collapse of the core and the supernova, and for this reason their study is of great importance for the understanding of these energetic events.

The study of the physical properties of supernova remnants provides thus important diagnostics to probe the physics of supernova explosions. In this context, it is very important to study the chemical abundances of the fragments of material launched by the explosion (called ejecta) using observations in the X-rays

One of the best targets for this kind of science is the Vela supernova remnant, which is very close to the Sun, being at about 920 light years from Earth. The supernova explosion that generated this remnant occurred about 11000 years ago, and today the remnant occupies a large area in the sky, with a diameter of about 8 degrees. The team of researchers led by V. Sapienza (University of Palermo and INAF-Astronomical Observatory of Palermo) has analyzed X-ray observations acquired with the satellite XMM-Newton of the European Space Agency, and the satellite ROSAT, of a particular fragment in the Vela supernova remnant. This fragment is an interesting target since it is aligned with two previously identified fragments which were formed by a jet launched during the explosion. The nature of these two knots is demonstrated by their rich abundance in silicon, which is an element that is formed in the deep layers in massive stars. It occurs in several remnants that outer ejecta are observed to be rich in elements which are formed in the deepest layers of the progenitor, a phenomenon which is called “chemical inversion”. The authors of this study have found a rich abundance of elements such as neon and oxygen also in the studied knot, which suggests that it is also part of the jet. The astronomers also identified an extended filament in the remnant, which is about 60 light years long. From the spectral X-ray analysis of the radiation emitted by this filament, they suggested that it is a relic of the wind emitted by the massive stars, heated and compressed by the expanding shock after the explosion. The study is described in the paper: “X-ray emitting structures in the Vela SNR: ejecta anisotropies and progenitor stellar wind residuals“, recently appeared on Astronomy & Astrophysics. The astronomers F. Bocchino, S. Orlando, and E. Greco of INAF-Astronomical Observatory of Palermo, and M. Miceli and G. Peres of the observatory and the University of Palermo are among the coauthors of this study.

The figure (click here to visualize the entire figure) shows an image from ROSAT in the 0.1-2.4 keV band of the Vela supernova remnant. The region marked with “K” is the knot studied in this paper, while the black cross marks the position of the Vela pulsar (which is the remnant of the core of the exploded star) 11000 years ago.