From TESS light curves, a new method to study stellar activity applied to stars with planets 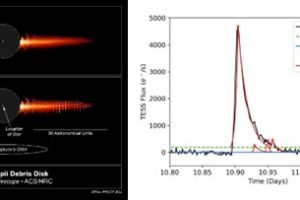 Stars are variable sources over timescales which depend on the phenomena triggering this variability. These phenomena are typically produced by the interaction between the stellar magnetic field and its plasma. Typical examples, observed and studied in great details in the Sun, are: flares (sudden release of a large amount of energy by the magnetic field which heats the gas in the coronal magnetic structure up to million of degrees), stellar spots (dark regions in stellar photosphere where the plasma is colder than the surrounding gas), and chromospheric activity such as prominences.

The most energetic phenomena, such as flares, are sources of intense emission of X-rays and UV radiation. This readiation is very energetic, and it can impact the atmosphere of planets in close orbits nearby the star. The UV radiation, in fact, is absorbed by the gas in the outermost layers of the atmosphere, dissociating its molecules, while X-ray can penetrate deeper, increasing the ionization rate. This induces chemical reactions which change the chemical abundances in the atmosphere, it may affect its density and temperature profile, and, in the most extreme cases, it may induce the photoevaporation of the outermost layers of the planetary atmosphere.

Surveys such at the one performed with the NASA satellite TESS (Transiting Exoplanet Survey Satellite), which is producing continued observations with a cadence of only two minutes of a large number of stars across most of the sky, are of great importance to study the magnetic activity in stars with planets. The team of researchers led by the astronomer S. Colombo (INAF – Astronomical Observatory of Palermo) developed a tecnique aimed at identifying the stellar short-term variability events, mainly flares and chromospheric activity, from TESS light curves (which are the time variation of stellar luminosity). These measurements, even if made in optical band, allow to trace the most energetic events, which produce X-ray and UV radiation. The method has been succesfully applied in two stars with exoplanets: DS Tuc A, a G6V star 40 million of years old with a gaseous giant planet in a very close orbit, and AU Mic, a M1 star 22 million of years old hosting two Neptune-size planets and a debris disk. In AU Mic events have been recorded with a rate of five flares per day more energetic than 5×1031 erg/sec (in the Sun, for instance, flares typically release an energy of 1027 erg/sec, with the most extreme and rare events releasing up to 1032 erg/sec), while in DS Tuc A a rate of two events releasing about 2×1032 erg/sec of energy per day has been found. In particular, in AU Mic the observed flares are more frequent in a particular phase of stellar rotation, suggesting the presence of a stable magnetically active region in the stellar surface. This is likely induced by a complex, and to date not fully understood, magnetic connection between star and its planets. The study is described in the paper: “Short-term variability of DS Tucanae A observed with TESS“, recently published by the journal Astronomy & Astrophysics, with the collaboration of the astronomers A. Petralia and G. Micela of INAF – Astronomical Observatory of Palermo.

The figure (click here to visualize the entire image) shows an example of the light curve of one of the observed flares. The black line marks the observed time variability of the stellar flux, increasing quickly at the beggining of the flare, and then declining smoothly. The red curves are obtained from analytical functions used to describe the observed variability. The green line marks the zero intensity. In this curve, in fact, the quiescent level of stellar emission has been removed, so that the light curve is at about zero intensity before and after the flare.