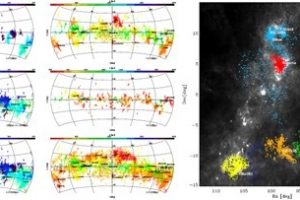 After their formation, during the first few million of years (how many? it depends on the mass: the larger the stellar mass the faster is their evolution) stars continue to contract under their the action of their own gravity, rising their temperature and density. During this phase, their nuclei have not started yet the thermonuclear reactions that will power the stars during the rest of their life. Besides, during their early evolution, these stars still accrete gas and dust from the surrounding environment. For these peculiar properties, these stars are called “protostars” or “pre-main sequence stars“.

Studying protostars is important for our understanding of star formation, the early stellar evolution and how it impacts the final stellar properties, and the planets formation process, which occurs during this phase. Since they are newborn stars, observations of protostars are typically limited to those associated with nebulae (star forming regions) or the dense cores of star clusters younger than 30 million of years, where these stars are more numerous and easy to select. Instead, it is more difficult to select pre-main sequence stars in the low-density extended outer regions of star clusters and star forming regions. This limits our knowledge of the real content of young stars in the Galaxy, and how star formation, early stellar evolution and planets formation occurs in these environments.

In the last years, exisiting observing surveys that covered most of the sky allow astronomers to search young stars not only in the most important star forming regions and star clusters, but un the whole Galactic plane. Among these surveys, the ongoing observations of the Gaia satellite of the European Space Agency are particularly important, since they are providing precise photometry, spectroscopy, astrometry, and distance measurements for about 1.5 billion of stars. The team of researchers led by the astronomer L. Prisinzano (INAF – Astronomical Observatory of Palermo) have analyzed the Third Early Data Release of Gaia data in order to define criteria aimed at selecting young stars, and distinguish them from other stellar populations that in specific conditions may be confused with pre-main sequence stars (such as highly extinguished giant stars). These criteria allowed the team to select 124440 pre-main sequence stars younger than 10 million of years and closer than 4500 light years from the Sun, together with other 65863 low-mass stars with an age ranging between 10 and 100 million of years and closer than 1500 light years. These results have been obtained also using the unsupervised machine learning algorithm DBSCAN, which also allowed the researchers to associate the selected young stars with 676 star clusters and/or star forming regions. Among these, there are both well-known nearby star forming regions such as the Orion, the Scorpius-Centaurus, and the Vela regions, which seem to form an extended and complicated structure inclined of about 20 degrees with respect to the Galactic plane, and several newly-discovered regions. The catalog, described in the paper: “Low mass young stars in the Milky Way unveiled by DBSCAN and Gaia EDR3. Mapping the star forming regions within 1.5 Kpc“, which has been recently published by Astronomy & Astrophysics among the highlights, e.g. papers presenting outstanding results, will be made available for the whole scientific community, allowing to study the entire young stellar population nearby the Sun.

The figure (click here to visualize the entire image) shows a density map of pre-main sequence stars associated with star forming regions younger than 10 million of years. In the top-left panel the Sun is at the origin (0,0), the x-axis is directed toward the Galactic center, while the y-axis along the rotation of the Galaxy. The dashed circles mark steps of about 1500 light years of distance. In the top-right and bottom-left panels, the z-axis is perpendicular to the Galactic plane. The color-bar shows the values of surface density. Several known star forming regions are also marked.