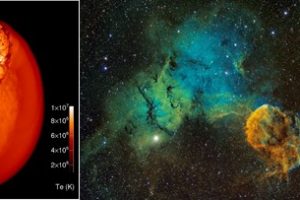 Supernova remnants are clouds in rapid expansion produced by supernova explosions. They are often characterized by a complex morphology, resulting from the interaction between the expanding remnants and surrounding clouds. Supernova remnants also emit radiation on a wide band of the electromagnetic spectrum. This is due to the variety of phenomena occurring in these objects, and because of the different physical conditions (such as temperature and density) of their various components, such as the material shocked by the incident forward blast wave, the ejecta heated by the reverse shock, or the neutron star formed by the collapse of the nucleus of the exploded star. A particular class of supernova remnants are the “mixed-morphology” remnants. These objects are characterized by an outer radio shell surrounding a thermal X-ray emitting region. Several hypotheses have been proposed to explain the formation of mixed-morphology remnants, but the dominant theory predicts that they result from the interaction between the expanding remnant and surrounding dense clouds.

IC443 is one of the most studied “mixed-morphology” remnants. With a distance of about 4900 light years and with an angular extension of 50 arcminutes (for comparison, the angular diameter of the full Moon is about 31 arcminutes), this remnant has a complex morphology, with the dominant structure made by two different and almost circular shells. The morphology of IC443 results from the interaction between the remnant and dense clouds in the north-west, south-east, and north-east. The X-ray emission of IC443 is composed by a thermal diffuse component, emitted inside the remnant, and an energetic and not homogeneous emission, both thermal and non thermal, produced either by the ejecta and clumps of material heated by the reverse shock, or by the pulsar wind nebula, e.g. a cloud of plasma emitted as a wind by the neutron star. Previous studies led by astronomers of the Astronomical Observatory of Palermo obtained important results that allowed us to better understand the evolution of this remnant and the explosion that generated it. In a study of the 2008 (link) the astronomers suggested that IC443 is evolving inside the bubble created by the stellar wind of the progenitor during its late evolution. A more recent study (link) identified a jet-like structure rich of Magnesium inside IC443, whose direction coincides with the position of the neutron star at the time of the explosion.

In a recent study, described in the article: “Modeling the mixed-morphology supernova remnant IC 443. Origin of its complex morphology and X-ray emission“, accepted for publication in the journal Astronomy & Astrophysics, the team led by S. Ustamujic (INAF – Astronomical Observatory of Palermo) developed a 3D hydrodynamical model of the evolution of IC443 along 10000 years, also accounting for the interaction with the interstellar/circumstellar material. The model allows the researchers to explain both the morphology and most of the properties of the remnant. This is the first model that permits to reproduce the properties of a “mixed-morphology” supernova remnant. For instance, it shows how the remnant is confined by the surrounding clouds in the north-east and south-east, while it can expand freely in the south-west. Besides, it allows to synthetize the X-ray emission of IC443. The thermal component is reproduced by assuming that the explosion occurred at the position of the pulsar wind nebula, providing a further evidence supporting its association with IC443. The diffuse and irregular emission, instead, is produced by the ejecta and clumps of material, with a relation between the energy of the emitter radiation and the temperature of the ejecta: the coldest ejecta emit the less energetic radiation, while those heated by the shocks reflected multiple times inside the cavity where IC443 is expanding emit the most energetic component. A large contribution to the less energetic radiation is provided by the clouds shocked by the expansion of the remnant. The model also provides estimate for the mass of the ejecta (7 solar masses), the energy released by the explosion (1051 erg), and the age of the supernova remnant (about 8000 years).

The image (click here to visualize the entire figure) shows the density distribution predicted by the model after 8400 years from the explosion. The model is observed in different directions: along the line of sight (left panels) and rotated by 90 degrees around the z axis (right panels). The opaque surfaces mark the positions of material with a density equal to 1% (upper panels) and 5% (bottom panels) of the peak value. The colors mark different radial velocities, in units of 1000 km/sec. The semi-transparent surface marks the forward shock, while the toroidal semi-transparent surface shows the position of the cloud. The animations obtained from the model can be found here. Two 3D animations of the model can instead be found at this link and at this link.