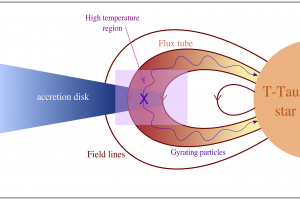 T Tauri stars are young low-mass stars (typically younger than 5 million of years), which are surrounded by a protoplanetary disk, e.g. a disk of gas and dust orbiting around the star. The disk material does not reach the central star: the dust component sublimates in the inner disk, where the temperature exceeds 1500 degrees, while the gas disk is truncated by the stellar magnetic field. The magnetic field also regulates the accretion of gas from the disk onto the star. In fact, the gas in the disk can be funneled by the magnetic loops connecting star and disk, and then it falls at the free-fall velocity of several hundreds km/sec onto the stellar surface.

In the past years several magneto-hydrodynamic (MHD) models describing the accretion from the disk onto the star driven by the magnetic field were presented, a large number of which produced by astronomers of INAF – Astronomical Observatory of Palermo.  In particular, these simulations show that the plasma trapped in the magnetic loops connecting star and disk may irradiate in X-rays once it is heated up by the energy released in magnetic reconnection events, similar to what happens on smaller scales in the Solar corona.

The recent simulations presented in the study: “Predicting the time variation of radio emission from MHD simulations of a flaring T-Tauri star” of Waterfall C. O. G. (Jodrell Bank Centre for Astrophysics, The University of Manchester), appeared on the journal Monthly Notices of the Royal Astronomical Society, focuses on the mechanisms producing radio emission from flaring magnetic channels. This model, in fact, accounts for the evolution of non-thermal plasma (e.g., electrons not in thermodynamic equilibrium) inside the magnetic loops connecting star and disk. The presence of this population of non-thermal electrons was considered by previous more simple models from some of the authors. In this paper it is predicted for the first time the intensity and circular polarisation of the radio emission in a frequency ranging between 1 and 1000 from the non-thermal plasma of a flaring T-Tauri star. The flare model developed by the Palermo astronomers allows to predict the detailed evolution of the radio spectrum during the flare. The astronomers S. Orlando (INAF – Astronomical Observatory of Palermo) and F. Reale (INAF – Astronomical Observatory of Palermo and University of Palermo) are coauthors of this study.

The figure (click here to visualize the entire image) shows a scheme of a T Tauri star and its disk, connected by magnetic loops filled with high-energy particles.