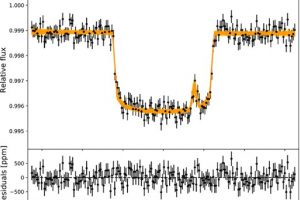 We typically observe phenomena due to the interaction between the magnetic field of Sun and its plasma, which is the hot (from 5600 K in photosphere to million degrees in the corona) gas with a high level of ionization, on the photosphere, chromosphere, and corona of our star. Some of these magnetic phenomena are starspots, faculae, prominences, and flares. In particular, solar spots can be seen as dark features in the bright photosphere, and they correspond to regions with intense local magnetic fields, which are colder (3000-4500 K) and deeper than the surrounding photosphere. Given their typical large distances from us, we can not observe directly spots in other stars. However, we can infer their presence with other techniques, such as time-resolved measurements of stellar luminosity. During the rotation of the stars, in fact, if spots emerge in their surface, we can observe faint but periodic dimming of their luminosity.

A similar variability can also be observed in stars hosting transiting exoplanets. These are planets that move across the surface of their stars along our line of sight during their orbit, occulting a tiny fraction of their stars. The technique of the transits consists in detecting the periodic small dimming of stellar luminosity during the passages of their planets along our line of sight, and it has permitted to date (December 2021) to discover 76.8% of known exoplanets (exoplanets.nasa.gov). However, it is important to account for the presence of starspots during the transit of the exoplanets. Occulted spots, in fact, can alter the profile of the transit and affect our capability of deriving the properties of the exoplanets, such as their radius. However, observations of transits, during which the spots are occulted, allow astronomers to derive important information on the spots, such as their temperature.

The team of researchers led by the astronomer G. Bruno (INAF – Astrophysical Observatory of Catania) recently presented simulations of transits of exoplanets orbiting around K and M stars, while their photospheres were populated by starspots. The astronomers have also synthetized from these simulations infrared observations of the phenomenon with the instruments NIRCAM and NIRspec on board of the James Webb Space Telescope (JWST). As described in the paper: “Hiding in plain sight: observing planet-starspot crossings with the James Webb Space Telescope“, JWST observations will allow astronomers to derive the temperature of occulted spots in stars which are bright enough, with a precision which is comparable to the precision achievable with observations in the optical band with the Hubble Space Telescope. Given the large number of transiting exoplanets that will be observed by JWST, these measurements will allow astronomers to perform studies of the properties of starspots in an unprecedently rich sample of stars. The paper has recently appeared on the journal Monthly Notices of the Royal Astronomical Society, with the collaboration of G. Micela, INAF – Astronomical Observatory of Palermo, and G. Cracchiolo (University and Observatory of Palermo).

The figure (click here to visualize the entire image) shows a simulated light curve (which is the time variation of stellar luminosity) that will be obtained from NIRspec observations of a K star during a transit. The transiting exoplanet has a radius of 0.25 Jupiter radii, and it is occulting a system of starspots with a temperature of 2900 K. The dimming is due to the transit of the exoplanet, while the faint bump during the transit is due to the occultation of the starspots.