Are the planets of V1298 Tau evaporating? 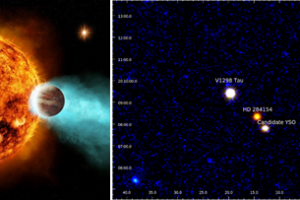 The search for young exoplanets is crucial to our understanding of the planetary formation process and the early evolution of planets. The disc of gas and dust from which planets form, in fact, typically disperse in a few million of years. Before that, the young planets interact with all the material orbiting around the star within the disk, triggering important phenomena such as the planetary migration. Besides, young stars are particularly bright in X-rays and UV bands, mainly produced by a very active corona. This energetic radiation, when incident on the planets, dissociates and ionizes the gas molecules in the planetary atmosphere, heating it up and make it expand. In the most extreme cases, planets can loose a significant fraction of their atmosphere because of this process, which is called “photoevaporation”.

During its extended mission K2, the NASA satellite Kepler identified a rich planetary system around the young star V1298 Tau, a K1 star with an age of 7-11 million of years, belonging to the Group 29 stellar association. The planetary system counts two Neptune-like planets (planets “c” and “d”), a Jovian planet (“b”), and a Saturn-size planet (“e”). According to spectroscopic measurements, the two outer planets (b and e) have a mass of 370 and 200 Earth masses, while for the two inner planets it was only possible to constrain an upper limit for their mass, equal to 76 and 99 Earth masses. According to some authors, the mass-radius ratio of these planets can be explained only assuming that the planets are “fluffy”, which means that their atmosphere is inflated because of the incident energetic radiation.

In order to measure the flux of X-ray radiation emitted by V1298 Tau, and its variability over a short timescale, the team of researchers led by A. Maggio (INAF – Astronomical Observatory of Palermo) obtained and analyzed observations with the satellite XMM-Newton of the European Space Agency. The analysis shown emission from coronal plasma with a temperature between 3 and 16 million degrees, and a X-ray luminosity of 1.7×1030 erg/sec (100-1000 times brighter than the Sun in X-rays). From these results, and adopting a specific evolutionary model, it was possible to estimate the stellar X-ray luminosity over its entire evolution. Thus, adopting an hydrodynamic model for the planetary atmospheres, the researchers found that the two outer planets are not going to loose significant amount of mass, while the two inner planets may loose part of their atmospheres if their masses are below 40 Earth masses, or even all the atmospheres if they are lower than 20 Earth masses. The study is described in the paper: “New Constraints on the Future Evaporation of the Young Exoplanets in the V1298 Tau System“, recently appeared on The Astrophysical Journal. Among the coauthors, the astronomers D. Locci, I. Pillitteri, S. Benatti, and G. Micela of INAF – Astronomical Observatory of Palermo.

The figure (click here to visualize the entire image) shows the XMM-Newton observation of V1298 Tau. Nearby there are the stars HD 284154, which may form a binary system with V1298 Tau, and a candidate young star.