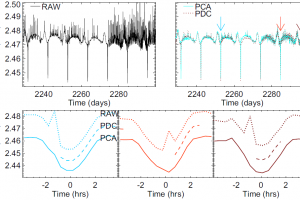 Several fields in modern astronomy rely on high-precision photometric data. This is true, in particular, for the search of exoplanets with the method of transits. This method consists in searching very small periodic dimming of stellar emission due to the transit of planets along the line of sight during their orbits. For instance, the transit due to a Hot Jupiter (a gaseous giant in a very close orbit, closer than the orbit of Mercury around the Sun) has a depth of 1-2%. This fraction becomes rapidly smaller at decreasing the size of the planet or increasing the radius of its orbit.

High precision photometric data may be affected by systematics that must be removed before analysis. An important case is the K2 mission, which is the extended mission of the Kepler satellite (a NASA observatory aimed at searching exoplanets with the transit method) after the failure of two reaction wheels that hampered the capability of the satellite of maintaining pointings for a long time. K2 mission was designed in order to allow Kepler to continue its mission of exoplanets hunter along the ecliptic, but its photometric precision was reduced by a factor 3, and its light curves present important systematics.

Several techniques have been proposed to remove these systematics, among which a procedure included in the standard data reduction pipeline. The astronomers A. Petralia and G. Micela of INAF – Astronomical Observatory of Palermo, proposed a new method to remove systematics from K2 light curves based on the Principal Components Analysis (e.g. a statistical method aimed at reducing the number of variables of a given problem). The authors have verified that their method does not affect the astrophysical signals in the K2 data, such as transits, for instance. Besides, the study has allowed the authors of identifying a set of stars with a very stable photometry, that can be used as standard stars for the Ariel (Atmospheric Remote-sensing Exoplanet Large-survey) mission, in which the Astronomical Observatory of Palermo is largely involved. The results of this study are described in the paper: “Principal component analysis to correct data systematics. Case study: K2 light curves“, recently appeared on Experimental Astronomy.

The image (click here to visualize the entire figure) shows the K2 light curve of the eclipsing binary EPIC 211135350. The panels show the entire light curve acquired during the K2 mission, and a magnification of the transits, comparing the original light curve, the light curve obtained from the standard pipeline, and the one corrected with the method suggested in this study.