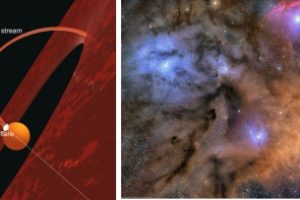 “Protostars” are stars a few million years old, which are still accreting gas and contracting for their own gravity, and whose nucleus has not reached yet the temperature and pressure necessary for the onset of thermonuclear reactions. The youngest protostars are still surrounded by a protoplanetary disk of gas and dust (class II protostars) or even by an accreting envelope of gas, residual of the pre-stellar cloud (class I protostars). Protostars are also bright X-ray sources. This X-ray emission arise from a scaled up version of the stellar corona similar to that of main sequence stars, magnetic activity such as flares, and the accretion of gas from the disk onto the star.

The study: “Deep X-ray view of the Class I YSO Elias 29 with XMM-Newton and NuSTAR” of I. Pillitteri (INAF – Astronomical Observatory of Palermo), recently appeared on Astronomy & Astrophysics, shows a detailed analysis of the X-ray emission of the class I protostar Elias 29, belonging to the rho Ophiuchi star forming region. The analyzed data have been obtained from the ESA satellite XMM/Newton and the NASA satellite NuSTAR. The telescopes observed both the quiescent X-ray emission, mainly from the stellar corona, together with two bright flares, about 5.5 hours and 14 hours long. During the latter flare, the authors have also observed an increase of the absorption of X-rays by material lying along the line of sight, which has been interpreted as an evidence that the flare occurred at the base of a column of accreting gas from the disk onto the star, as shown in the figure (link).

Another important result is the observation of fluorescence X-ray photons with an energy of about 6.4 keV from the protostar. This emission has been observed in other protostars, and typically interpreted as fluorescence emission from neutral iron atoms along the surface of the protoplanetary disk, excited by incident high energy (> 11 keV) X-ray photons emitted during stellar flares. In Elias 29, however, this fluorescence emission has been observed also during the quiescence, meaning that another excitation mechanism should occur. The authors have hypothesized that iron atoms are excited by high-energy particles accelerated by the intense magnetic field around Elias 29. This idea is supported by the observations of energetic X-ray emission which is not compatible with coronal emission. The astronomers S. Sciortino (OAPA), F. Reale (OAPA/UNIPA), G. Micela (OAPA), C. Argiroffi (OAPA/UNIPA), E. Flaccomio (OAPA) and B. Stelzer (Univ. di Tubigen of OAPA) are coauthors of this study.